Blatant Ageism in Tech: Why You Should Hire Employees over 50 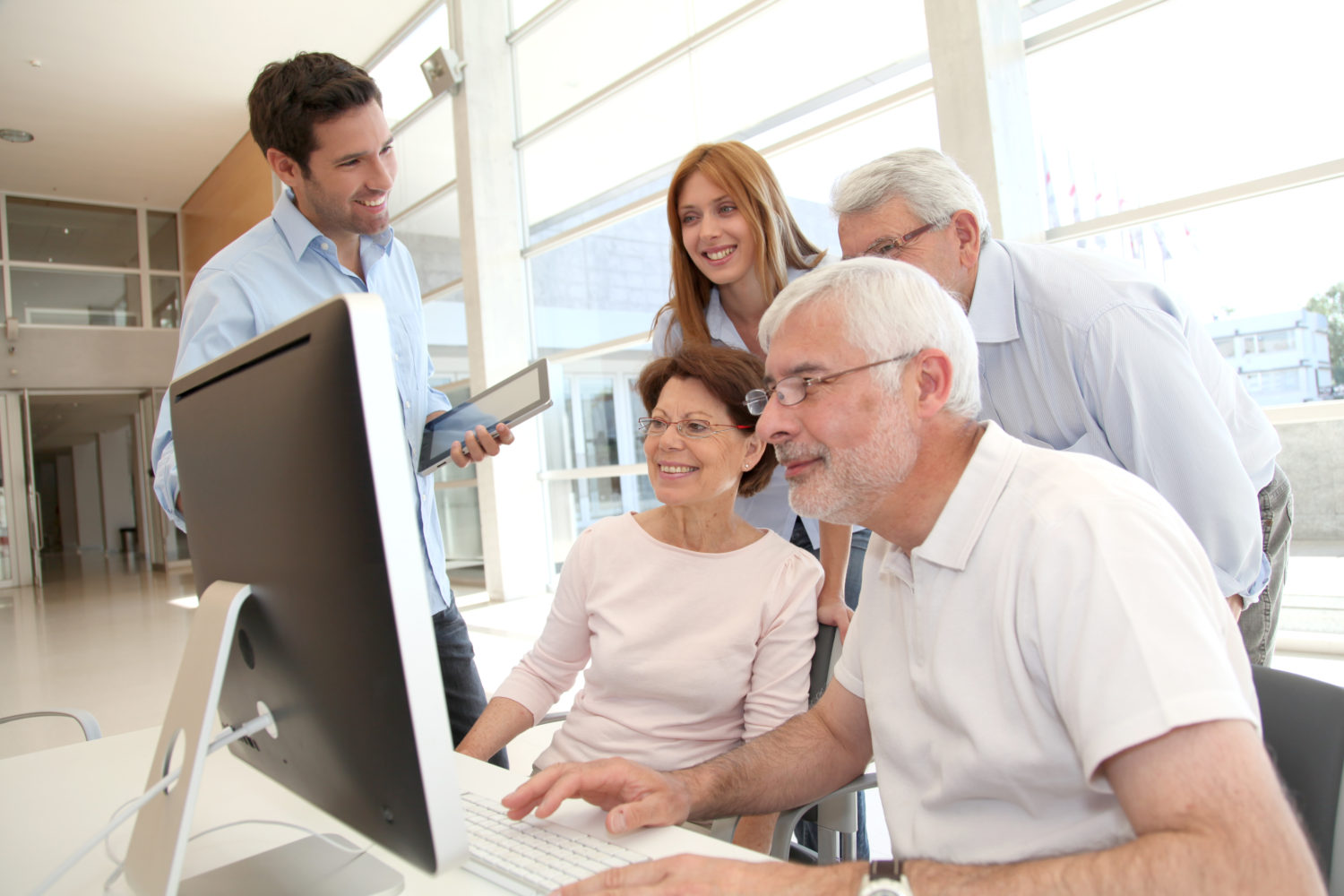 The modern employment culture has a few flaws that employers like to sweep under the rug. Older workers are finding it almost impossible to retire at 65 and are continuing to work 70 years old and beyond while some employers subtly seek to push them out.  Age discrimination over 50 is an issue hindering hiring practices for many companies.

As of the third quarter of 2015, a third of America’s workers were over age 50, according to the Bureau of Labor Statistics. This trend alone has seen a fairly significant shift in demographics across most industries within the past few years. The percentage of older workers will continue to grow, as the Sloan Center on Ageing & Work in Boston predicts that workers over 55 will represent 25 percent of the workforce by 2019. Here’s the big problem: While Ageing Baby Boomers and Gen Xers want to work, companies and hiring managers want 24-34 year olds, not 50-75 year olds. No one is more guilty of this practice than companies in the technology sector. While the median age in the U.S. workforce is 42, it’s closer to 31 in the tech industry.

A recent Forbes report stated that people file more than 25,000 discrimination charges against employers each year. Some charges arise because of age discrimination of 40+ candidates in the hiring process or because older workers lose their jobs for no legitimate reason. Making hiring and firing decisions based on age is illegal, but age discrimination is rampant in the tech industry, and everyone knows it. According to Payscale the median age is 28 at Facebook, 30 at Google, 29 at LinkedIn and SalesForce, and 33 at Microsoft. According to an article in The Boston Globe, Facebook CEO, Mark Zuckerberg, stated “Young people are just smarter”. The same article also states that in 2013, executive Brian Halligan claimed “In the tech world, gray hair and experience are really overrated” and that he prefers to hire “young kids”. The employers who partake in discrimination appear to have a rationale that revolves around dollar signs. The perception is that younger people will work longer hours for lower pay. 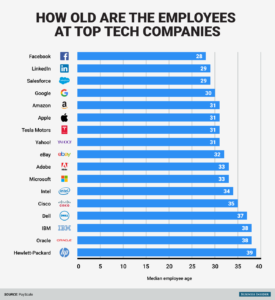 Median Age at Tech Companies according to PayScale

For those that do find work, a 2015 report by AARP found that almost half (48%) of the re-employed respondents said that they were earning less in their current jobs than their most recent job before unemployment. If you lose your job after age 55, it can be much harder to find another one. Research shows employers worry about older workers’ ability to perform job functions and their rising health care costs. But overlooking the benefits of hiring older workers is being shortsighted. Many advantages exist by hiring people who are older. Hiring the 50+ sector can benefit a business these 5 ways:

Seniors are experienced problem solvers and shouldn’t be overlooked. They are armed with advanced critical thinking skills, tend to have stronger communication skills, and understand how to navigate in the workplace. They have the skills necessary to perform the job, therefore, requiring less training than less experienced hires. No amount of training can replace 20 years of experience.

Experienced employees are confident and have a better understanding of workplace politics. They can serve as mentors to younger workers, which provides “intangible” benefits for an organization. Companies with strong mentors will enjoy lower training costs and lower employee turnover rates.

Software maker, Atlassian, states that out of their 1,500 employees almost every team has at least one member that is over 40. They feel age diversity is key innovative ideas and decision-making.

Senior hires are loyal and likely to stay on the same job longer especially now that many can’t afford to retire. By 50, they are ready to settle down and less likely to switch employers. Plus their children are grown so their work-life balance is more flexible. Loyal employees mean lower turnover costs for employers. They tend to be more open to working nights or early mornings. People are living longer and healthier lives and they want to stay active and engaged. Too many boomers retirement means cutting down to part time or doing something on a project basis but not stopping work completely.

Senior hires will come with extensive networks comprised of former supervisors, former coworkers, family, friends, business partners, and vendors. They can provide their employers with reputable referrals for other open positions.

An older person is more likely to have positive work ethics that are crucial when dealing with customers in a respectful and trustworthy manner as well as dealing with co-workers. Clearly, the technology sector could use more ethical people on board.

In the age where diversity matters and conditions have dramatically improved for women, the disabled, and minorities in the workplace, it is downright hypocrisy to witness the continuing trend of age discrimination among tech companies.

According to the Bureau of Labor Statistics, 32.2 percent of Americans age 65 to 69 are in the labor force, meaning they are working or looking for work, up from 21.3 percent two decades ago.

Absent on The 50 Best Employers for Boomers is…you guessed it…tech companies. For a shocking read be sure to check out Dan Lyons, a New York Times best-selling author, and his experience as a 52-year-old employee at HubSpot titled When it Comes to Age Bias, Tech Companies Don’t Even Bother to Lie. Since 2008, 150 biggest tech companies in Silicon Valley faced 226 complaints of age discrimination filed with the California Department of Fair Employment and Housing so senior workers are fighting back. HP is in hot water after terminated employees felt they were targeted in a large wave of layoffs because of their age. They plaintiffs recently sought class-action status on behalf of workers 40 and older who were laid off and replaced by younger employees. Bloomsberg reports that Google is scheduled to face a trial in a suit alleging age bias in hiring. Who knows if tech companies will ever catch on to the value of senior workers. It’s truly a shame because non-tech companies have discovered the advantages and are enjoying improvements to their bottom line and likely facing less age discrimination lawsuits. So…who’s laughing now?