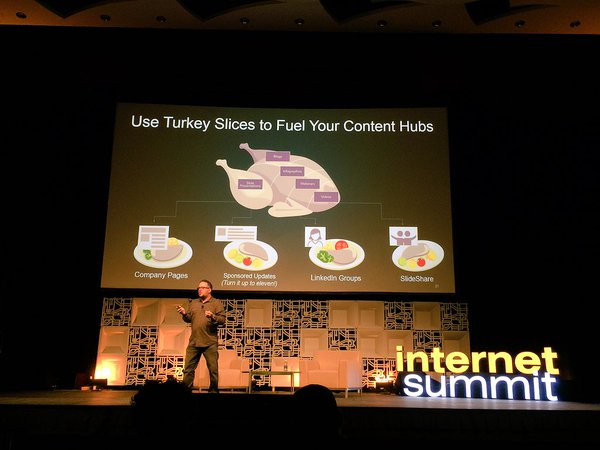 Internet Technology, Networking, and Factory Farming. One of these things is not like the other. As I expected it was a packed two days when the Internet Summit 2015 came to town this week in Raleigh, NC and the self-described event did indeed “fill your brain and professional toolkit with thought leadership and practical solutions designed to supercharge your customer strategies.” Leading digital industry thought leaders and locals made up the 1,700 plus crowd to hear, speak, and discuss session topics: Digital Storytelling, Multi-Channel Demand Generation, Maximizing Conversion Principles, Content Marketing, SEO, Email Marketing, Customer Engagement, Marketing Analytics, Mobile Design, Early Stage Fundraising Strategies, Start Up Trends, and loads more. 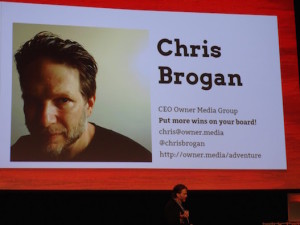 And as expected the event was loaded with keynote speakers like Rand Fishkin, Chris Brogan, and Beverly Jackson but it was Jason Miller that started talking turkey. Miller spoke to his multiple slides of sliced and diced turkey designed to communicate his “Repurposing your Content” Strategy by making comparisons to leftover turkey. Note that no animals were hurt during his presentation. 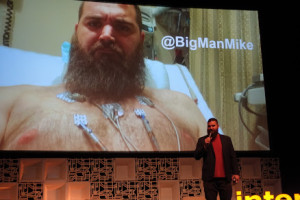 On Day 2 non-turkey eater, vegan, yoga enthusiast, meditator, and founder of Hip Hop music label Def Jam, Russell Simmons sat cross-legged at Thursday’s keynote chat. Simmons communicated multiple messages ranging from diversity, integration, passion, faith, and dedication when it comes to both personal and professional success. His underlying message – stick with your passion and embrace the next hurdle. “The work itself is what makes you happy. Everything else is short, fleeting, and unfulfilling.” The audience listened intently as he continued sometimes going off script to share his passion for yoga and his vegan choices. However, when Simmons went down the path of the evils of Factory Farming the audience quickly grew quiet with the exception of the small minority of audience members that resonated with this topic including this author. Many were surprised with his discussion points and disappointed with the format. The pushback wasn’t so much on the subject of Factory Farming and poisoned poultry but rather on the appropriateness. Most felt this wasn’t the venue for such a deep and controversial topic. I discussed this with Simmons backstage and I have no doubt he will continue to voice his opinion on Factory Farming and I encouraged him to do so in other venues. But for now back to the Internet Summit for some inspiration and innovation. It’s time to talk digital, not turkey. 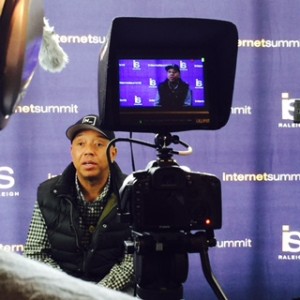 Russell Simmons interviews after his Keynote

Shout outs to Triangles own Karl Sakas, Sakas and Company, who helps digital marketing agencies grow and was part of the Roundtable “Accelerating Professional Development in the Digital Age. Scot Wingo, founder of ChannelAdvisor, spoke about what he is doing to support local start-ups and provided a peek at cool new technologies he follows: drones, 3d printing, and augmented reality. 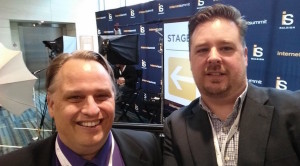 Networking was at an all time high thanks to cocktail hours and the psychedelic Party Bus that escorted attendees to the downtown Raleigh hotspots. At some point, attendees were bound to run into Devin Kelley, Method Savvy’s VP of Business Development. There must be at least 10 of him because he was everywhere. Did anyone catch Kelley’s What to Expect in Raleigh for the Internet Summit, a true must-have which covered all the important topics like nearby breweries, barbecue, and night spots? 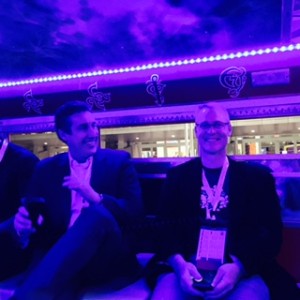 For any attendees still looking for inspiration, I recommend seeking out the Party Bus video here. Does anyone remember the name of the band on board? And on a final note anyone looking non-factory farmed, free-range, organic, turkeys can try Earth Fare or Whole Foods.