The Pros and Cons of Hiring Remote Workers

Working from home also referred to as telecommuting, home, remote, mobile, virtual, or cloud working, is one of the fastest growing trends in the workplace with 3 out of 5 North American workers stating they work remotely. According to statistics from the American Community Survey, 2.6% of the American workforce, or 3.2 million people are telecommuting and love it.  Companies that hire remote workers have access to a larger pool of qualified workers. Here’s a look at the pros and cons of working remotely.

Remote employees love it and companies have been able to seriously benefit from adopting the remote worker model. Major companies that hire remote workers to include the following:

Companies have been pleased to report that the work-from-home model actually increased the overall level of engagement in their staff. While skeptics worry that working out of the office would make employees too lax or closed off to be productive, it was found in a study by PGI that up to 80% of employees reported a feeling of greater overall morale when working outside of the office as opposed to being in-office and were more productive. So you can rest easy knowing that studies have generally shown that a flexible work policy facilitates better overall engagement across the board.

Hiring remote workers allows you to expand your talent pool over a larger geographical area. You no longer have to rely on local talent or forking out relocation packages to attract your most qualified candidates.

In addition to driving a higher level of efficiency, it has been found that allowing your employees to work remotely reduces turnover. Studies show that companies that took on remote workers had a significantly lower turnover rate compared to that of those that didn’t deploy a remote model. How many times have you lost a good employee because their spouse relocated to a new job? A remote work plan allows you to retain those employees.

One of the more unexpected and significant benefits of remote working model utilization is the reduction in overhead costs. Companies report that the work-from-home model lowers their operational costs. Cisco reported a savings of $277 million per year from telecommuting employees. Aetna was able to save money on 2.7 million square feet of office space, equating to savings up to $78 million; currently, Aetna has between 14,500 and 35,000 employees who work without having an in-office arrangement with the company.

The big debate is whether your remote workers are more productive and motivated than your office-based workers. Contrary to skeptics, it has been reported that working remotely produces employees that have a higher level of overall efficiency. Studies indicate that remote workers are indeed more productive. They perform better, work at home when they are ill which equates to less sick time off, are more engaged, and have a greater sense of satisfaction with their work and personal life. Rather than being less motivated, remote workers have actually demonstrated an even greater level of motivation, dependability, and productivity on average.

A Global Workplace Analytics survey showed that 53 percent of remote workers stated they were likely to work overtime, while only 28 percent of their in-office counterparts suggested they would do the same. An employee working from their home is free from distractions like water cooler chats, idle employee gossip while getting coffee, and annoying pot-luck lunches and birthday celebrations. They aren’t barraged with impromptu meeting requests or idle chats from colleagues. Instead, they can focus on the task at hand without interruption. Important to note, depending on the position, not everyone is their best during the hours of 9 to 5. Take for example if you are a developer. Working remote can embrace the non-conformist worker requirements of those who might be night owls, early morning producers, or weekend warriors. 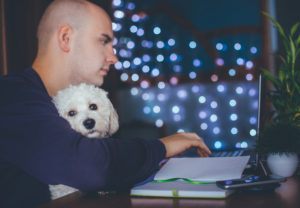 Managing remote workers forces companies to measure results not attendance. Just because someone is present at the office doesn’t mean they’re productive. Leadership that promotes employees based on performance, initiative, and excellence will send a message to the entire organization resulting in better company performance overall. Managers can measure success by setting clear metrics, setting weekly goals, gathering feedback from team members and clients, and evaluating work performed based on quality and results achieved.

Naturally, there are risks and concerns surrounding remote workers. Even with the well-documented success of allowing employees to telecommute, there are still those who have expressed doubts. There is the common apprehension that an employee working from home might not be as inclined to work as diligently as one who is physically in the office.

Industry giants like Yahoo and Best Buy are noted as being examples as some of the potential pitfalls that can be encountered in remote working arrangements; however, there are those who adamantly assert that the two industry giants’ failures to successfully implement a remote working model were due to a lack of proper communication and management. Yahoo and Best Buy threw out the remote working model at the first sign of failure, though many believe that there could have been improvements if employee accountability was better accounted for.

The Trick is in the Hiring and the Leadership

One of the keys to a successful remote work organization is the ability to hire the right people at the right time for the right role whether in the office or remote. Employers should exercise discretion in the employees that they choose to be approved for remote work; this could be limited to only those who have demonstrated a significant amount of competence and proficiency in their current or previous roles. The question isn’t whether to hire remote workers but how to qualify, where to find them, and how to support them. Look for people who take initiative, have a high degree of independence, strong work ethic, goal oriented, are receptive to feedback, and love accountability.