Are You the Victim of a Toxic Boss? 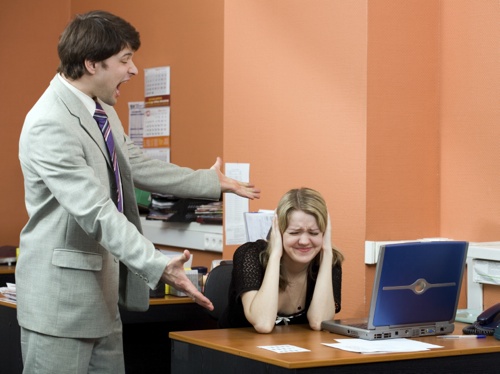 Have you been feeling overwhelmed lately especially Sunday night before you are due to return to the office? In the beginning, we explain it away and often blame ourselves. As the pattern of incompetence and bad behavior continues, you realize the demon you’re dealing with is actually a toxic boss who has the ability to make your life hell. You begin to question their competence, lose respect, sleep, and motivation. You may like your job, but the emotional toll becomes too much.  Here’s how to identify toxic bosses.

They sap the energy and creativity. They are belittling, petty and intimidating. They consider themselves better than everyone else. All they care about is “getting the job done”, “straightening this place out”, and loudly reminding everyone “where the door is” because “I am in charge.”

Most of us have had at least one toxic boss in our working life. I know I have. A bad or “toxic” boss is one who you dread speaking with, the leader who makes you feel small or insignificant, the arrogant, irritable, or inflexible manager, or the boss who has the ability to instantly suck the life and enjoyment from employees by simply entering the room. Is this sounding familiar?

Tactics of toxic bosses include constant criticism, inflating mistakes, falsely accusing workers of errors, spreading rumors about an individual’s work performance, yelling, threatening, bullying workers, or adjusting schedules in unfavorable ways. A toxic boss tends to micro-manage, intimidate, and instill fear in their subordinates while thriving on it. Working under a person who manages in such a way can lead to extreme job dissatisfaction and illness regardless of other positive company attributes.

Top Early Signs you have a toxic boss:

Unfortunately, toxic bosses hurts the morale and productivity of employees. If individual workers are suffering then the organization as a whole is also going to be affected by the toxic leader. The mood of the person in charge determines the tone of the work environment, the tone impacts behavior and behavior impacts results. High operating costs and above average staff turnover rates have been shown to be associated with the presence of a toxic leader. Jim Clifton, CEO of the Gallup organization, found that 60% of employees working for the U.S. federal government are miserable — not because of low pay, poor workplace benefits, or insufficient vacation days — but because they have bad bosses.

Got rewards programs, EAP programs, career paths, and attractive health insurance to entice and retain your employees? Forget it. Toxic bosses will negate these investments and employee programs. None of these programs will make much difference to the people managed by bad bosses.

Each year, the nation’s worst bosses usually end up costing their employers tens of millions of dollars in monetary damages and lawsuit settlement payments.

To date, the 2013 America’s Worst Bosses have cost their employers over $52 million in monetary damages and lawsuit settlement payments. Of this amount, the 33 bad bosses in the public sector have cost their respective taxpayers over $21 million. eBossWatch, the leading career resource that enables people to anonymously rate their bosses and evaluate potential employers, publishes an annual list of America’s Worst Bosses at http://blog.ebosswatch.com/americas-worst-bosses/ The managers who made the 2013 list of America’s Worst Bosses were named in workplace lawsuits filed by their employees or were accused of workplace harassment and/or sexual harassment, discrimination, retaliation, and/or creating a hostile work environment.

For some of us, it may help to understand why a boss selects certain individuals to target their toxicity. Most likely, you were targeted because you posed a threat. The perception of threat is entirely in his/her mind, but it is what he/she feels and believes. Targets are often the veteran and most skilled in the workgroup. They are independent and refuse to be subservient. They are the “go-to” person that other employees turn to for guidance. Targets are ethical, honest, well liked, social, and usually, possess greater emotional intelligence. Targets are non-confronting and do not respond to aggression with aggression which unfortunately sets up a nice playground for the bully boss.

Most of the time this behavior has to do with a need for control and respect while masking a deep level of incompetence they are deathly afraid of being discovered by their employees. Once discovered, then the passive-aggressive and vindictive games begin because they’ve been exposed. This appetite for control also has to do with their inability to maintain any semblance of the control in their personal lives. They lie and deceive their employees because their fragile egos are rarely able to handle the truth. These managers tend to have control issues in their own personal lives.

Thus the only place they can maintain control is in the workplace. But as with their personal lives, things eventually fall apart. This certainly seems to make sense. Knowing what I know about my previous toxic boss outside the office I can connect the dots. Multiple failed marriages and a failed support system are taxing whether they are the result of one’s bad behavior or the symptoms. Using their employees like puppets to serve their pathological incompetence is really about filling a need that only psychotherapy can fix. They are simply people that are lacking tools to cope with the challenges that face them in their personal lives and in the workplace.

What makes a boss toxic?

If you would like to share your toxic boss experience I would love to hear from you.

Source contributors to this article: